Very courageous exhibition by Alessi (Francesca Appiani, Museo Alessi curator) : all things that seemed to be excellent ideas (and that were) but which were never produced and why.

I listed the different reasons why these amazing projects were finally in-possible.

Ex: Erwan et Ronan Bouroullec, condiment set and « Oval » carafe, 2010. « The standard required restaurants to have condiments in their containers so that they could know the manufacturer’s information and the expiration date. »

Artifact already made by a competitor at the same time like Jakob Wagner, bottle holder, 2010 honeycomb. 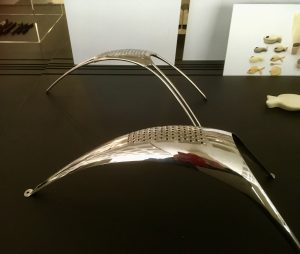 “The light and curvilinear design made the whole (the rasp in particular) structurally fragile: the mechanical pressure exerted on the object during its use would inevitably have distorted the fine supporting elements.”

Elena Manferdini, fruit baskets, 2005 “The cut and folded metal sheet required by the designer however, proved to be dangerously sharp and uncomfortable to handle, a problem impossible to solve without compromising the sinuous and natural forms created by the designate”.

“The reason the project was interrupted, however, had nothing to do with these problems but rather with the fact that Mendini found the shape of the glass overflowing with sides of the steel object particularly unsightly. Thanks to the prototypes, it was possible to see the objects in their physicality and to see that they were far enough away from the sophisticated elegance suggested by the designer’s original sketches”.

Chiara Moreschi, mirrors, 2010 : “The first tests, performed on the collection of table mirrors, raised some doubts on the understanding of the project by the people. The mirrors created by Moreschi were clearly fascinating but a lack of clarity surrounded their use and they were also difficult to handle.”

Or like Giovanni Levanti, magazine rack « Servomuto », 2011 “The function of the object was not understandable by its shape, as it looked like a bar stool, a tripod, or another room unconventional furniture. Levanti spoke of this project as an « amphibious object » because it had its place in different rooms of the house: the living room, the bathroom, the bedroom, etc. The ambiguous form of the project and the uncertainties about its functionality led to its suspension.” 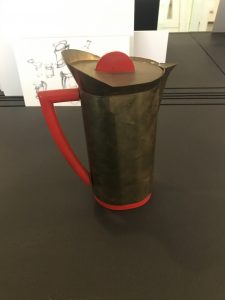 Hans Hollein, Melitta coffee maker, 1980. “In 1980, architect Hans Hollein began working on the design of a coffee maker Melitta. The main unknown of the project was the possible reaction of the public: accustomed to its anonymous and inexpressive nature, how could a version with a more formal definition be to be received? In addition to some production problems, the coffee maker has never been because of this: the feeling was that the people for whom Hollein had conceived the project might not have understood (and therefore accepted) such a sophisticated object.”

For example : Carlo Alessi, parmesan pot, oil and vinegar set, 1949
« Son of the founder of the company, Giovanni Alessi, Carlo joined the family business from his younger age and designed most of the artifacts from the mid-1930s to 1940s. These two objects belong to the initial phase of experimenting with the potential of a « New » material that, at the time, was beginning to be known: stainless steel. Made from a single sheet of metal cut and folded, the two projects were not never produced. However, they represent an important step in the development industrial company. Initially founded to make copper handicrafts, brass and nickel-silver (then chrome, nickel or silver), Alessi began this development in the late 1940s, selecting from its catalog of articles that can be made of stainless steel using industrial processes. »